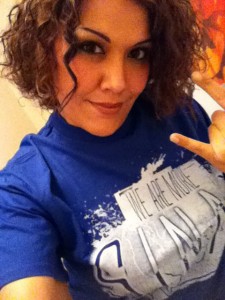 “SINAI is a band that reaches my soul for a number of reasons. For me, music is my release. It is a place I get lost in emotion and receive all my energy from. SINAI is a band based on the passion for music. When I listen to their songs I hear their own truth in life played in every note and sang in every lyric. SINAI breathes music at it’s truest form and I am listening.”

Thank you Synna for supporting SINAI!

To all of our fans: This could be you next month! Aside from being featured on the website, Our Fan of the Month is winning a prize pack sent directly from SINAI! So keep telling all of your friends, and helping spread the word. Leave SINAI a comment on www.sinaiband.com, www.wearesinai.com, Facebook & Twitter. Walt, Nick & Shane appreciate your comments.

Recommend to your friends on Facebook and Twitter, or anywhere on the web. Just be courteous when posting. We appreciate all of your hard work and support.

If you would like to help even further please go and signup for our Street Team under the Street Team tab in the menu bar or on the homepage. We have additional contests every month for Street Team members as well.

“We can’t thank you enough for all of your hard work & support in spreading the word about SINAI. We have so much more in the works. Hang tight, we’re just getting started..”

Previous Fan’s of the Month

FAN OF THE MONTH FEBRUARY 2011

FAN OF THE MONTH DECEMBER 2010

FAN OF THE MONTH NOVEMBER 2010